Hyperbaric oxygen therapy is a physical therapy that exposes the body to an environment higher than the standard atmospheric pressure (usually 1.4 ATA) and allows the patient to inhale 100% oxygen concentration to increase the oxygen content in the body to achieve the treatment of diseases.

The famous Brazilian football player Neymar was kicked down by his opponent and left the field injured. In order to return to the court as soon as possible, he would undergo hyperbaric oxygen therapy every other day. His personal physical trainer stated that Neymar’s rehabilitation process has been accelerated with the assistance of hyperbaric oxygen therapy. As early as the 2016 European Cup, Cristiano Ronaldo used hyperbaric oxygen for adjuvant treatment after injury to the medial collateral ligament of the left knee joint. 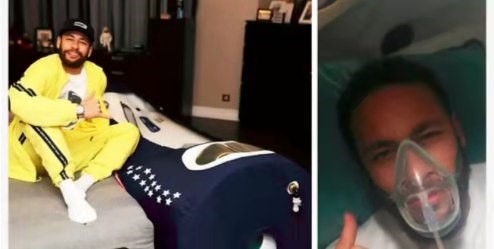 Sports injuries generally include three stages of development: acute inflammation, tissue organization, and functional remodeling. The basic principle of hyperbaric oxygen therapy is to increase the oxygen in the blood and distribute the oxygen to the tissues and organs of the whole body under the action of the pressure gradient, improve the ischemic and hypoxic state of the tissues and organs, reduce the permeability of the blood vessel wall, and reduce exudation and edema, the reduction of edema will reduce the tension of local soft tissues, which is conducive to the smooth flow of blood circulation. Oxygen is indispensable in the period of organizational organization and function remodeling.

The traditional methods of recovery from exercise fatigue mainly include active activities, passive relaxation, nutritional supplements and water baths. In addition, hyperbaric oxygen may also have a positive effect on preventing and relieving fatigue after exercise.

In a suitable high-pressure environment, by increasing the oxygen concentration inhaled to increase the content of dissolved oxygen in the blood, the oxygen content and oxygen storage in the tissue are correspondingly increased, which can effectively improve, alleviate and correct the body’s hypoxia. At present, the effect of hyperbaric oxygen on sports injury and physical recovery after exercise is gradually being recognized by coaches and athletes. In the future, it is hoped that hyperbaric oxygen can be more widely used in sports medicine and mass fitness to benefit athletes and fitness groups.

Next : Transcutaneous pressure of Oximetry (tcpO2）