When Do You Need Oxygen Machine? Best Guide 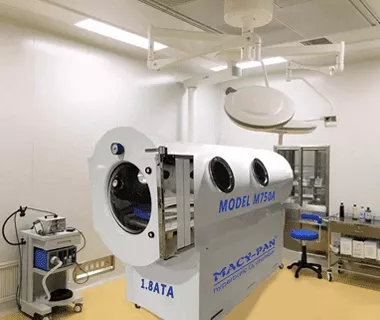 What is hyperbaric oxygen therapy?

Hyperbaric oxygen therapy is good to use to increase the oxygen uptake into the blood above normal levels. In this way, one wants to achieve a better supply of oxygen to tissue that poorly supplies with blood.

Under normal conditions, the red blood pigment (hemoglobin) in the red blood cells (erythrocytes) is already more than 98 percent saturated with oxygen, so that an increase with the oxygen supply from normal breathing air is hardly possible.

In oxygen machine, the external pressure increases to 1.5 to 3 time’s normal pressure using a pressure chamber. As a result, more oxygen physically dissolves in the liquid components of the blood. The amount is proportional to the ambient pressure and the oxygen content in the breathing gas.

Due to the increased oxygen content in the blood, the metabolism is said to accelerate in tissues with poor circulation. This intends to drive healing processes, for example.

When do you do hyperbaric oxygen therapy?

Hyperbaric oxygen therapy is good to use for:

The effectiveness of oxygen machine is controversial. For example, the Institute for Quality and Efficiency in Health Care (IQWIG) was able to demonstrate a benefit of HBO therapy for diabetic foot syndrome with regard to wound closure – but not with regard to other factors such as mortality, length of hospital stay and amputations (as of 2016).

The IQWIG was not able to prove a benefit of hyperbaric oxygen therapy for burns or the death of bone tissue on the femoral head (femoral head necrosis) (status 2007).

The study situation on the effectiveness of HBO therapy in acute hearing loss is also unsatisfactory. For example, an evaluation of several studies on the subject (2012) showed that although oxygen machine was able to significantly improve hearing in patients with sudden hearing loss, the clinical significance of this result remained unclear.

In addition, the number of study participants was small and the studies had methodological inadequacies.

The current guideline does not recommend hyperbaric oxygen therapy for the treatment of chronic tinnitus.

What is oxygen machine therapy?

Before hyperbaric oxygen therapy, you will examine for your suitability for pressure, for example by means of an ECG and lung function test. The patency of the auditory tube (tuba auditive) – the tubular connection between the pharynx and the middle ear – is also checked. This is important for equalizing the pressure in the ears.

Pressure chamber Space from which you can contact the doctor or nursing staff at any time (e.g. by speaking loudly). The pressure in the chamber now slowly increases so that the pressure in the ears can equalize without complications and as comfortably as possible.

You can facilitate this process yourself by chewing gum or pressing air into the throat area while pinching your nose (Valsalva maneuver).

Once the intended pressure reaches, put on an oxygen mask. You now breathe in pure oxygen through oxygen machine. At the end of the therapy, the pressure reduces over a period of several minutes, which also refers to as discharge. 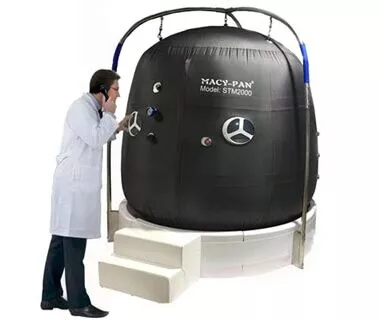 It depends on the indication (area of ​​application), a session in the pressure chamber lasts between 45 minutes and more than six hours. Treatments lasting several hours are necessary, for example, in the acute therapy of diving disease.

How many sessions are held in individual cases also varies. Depending on the indication and the course of the disease, some patients only have to sit in the oxygen machine once, while others have to sit down several times (up to 30 times or more).

What are the risks of hyperbaric oxygen therapy?

The doctor treating you will explain to you in advance about the possible side effects and risks of HBO therapy. These include, for example:

Some people also react to breathing oxygen under pressure with seizures (rarely).

What do I have to consider with hyperbaric oxygen machine?

Also react if you notice such symptoms in other patients in the hyperbaric chamber.

These high and also very high oxygen partial pressures (pO2) have a number of direct and indirect effects on the human body. Most of these effects are helpful for the purpose of alleviating or curing diseases, and in selected cases they are even very effective.

In addition to and through these direct effects, for example

In very high doses, oxygen can also have effects to cells

In very high doses, oxygen can also have effects that can be harmful to cells in the human organism. However, these “side effects” can also be good to use therapeutically: a massive supply of oxygen (as with HBO) can make certain types of malignant diseases more sensitive to radiation therapy.

An example of this is the recurrence of stage IV neuroblastoma in children and adolescents.

The costs for hyperbaric oxygen machine are usually only covered by social security in certain cases..

Next : Any Side Effect of Portable Hyperbaric Oxygen Chamber?